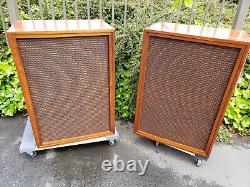 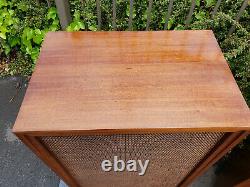 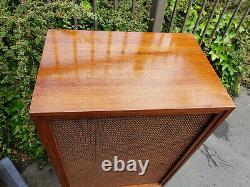 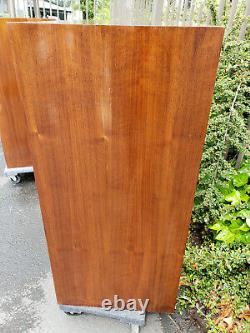 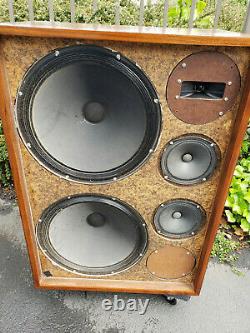 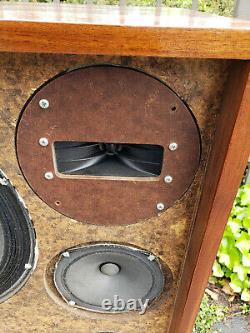 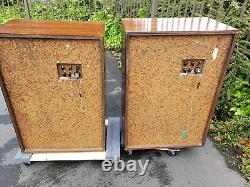 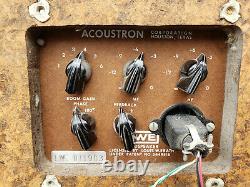 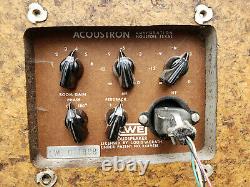 I saw these at an estate sale of a Beaverton, Oregon jazz musician. Had no idea what they were, but since they looked like serious business indeed. Researching them, I realized Id stumbled onto a pair of Unicorns. As rare as Acoustron speakers are, these high-end variants- The LWE-II's- were produced in extremely limited quantities, and I have yet to find an instance of another pair being offered for sale. In fact, as far as Ive been able to determine, the pictures Ive taken for this listing are the ONLY stand-alone photographs of LWE-IIs anywhere on the internet. So one shudders to think what these LWE IIs (with TWO 14 woofers) will sound like once properly dialed in.
These are huge, heavy floor speakers, roughly the size of Klipsch Cornwalls, The performance of the little brothers to these (the LWE Is) have been favorably compared to higher-end Klipsch and Klipschorn products and have been extensively discussed in Klipsch-specific forums. 34" x 24" x 16. One 5 Horn Tweeter (Electro-Voice T-35). Nominal Impedance 4 or 8 OHMS. Frequency Response 20 - 20,000 Hz (5dB).
Mid and High level controls. The exteriors are excellent- though obviously not perfect. One of the speakers played fine when attached to a 100 watt amp, but the other stubbornly invoked its right to remain silent. Given the rarity and complexity of these speakers, I decided to venture no further. The wiring dangling from the male end of the plug looks clunky and was patched together decades ago, so perhaps this is the problem. Even when new, Acoustron speakers required professional set-up by a technician. Acoustrons are rare, complex speakers that will require the attention of somebody with the knowledge and patience to get the most out of them.

Id love to learn more about them and would be happy to share your wisdom and/or amend this listing accordingly. I manage a storage facility in metro Portland that is extremely easy to find and access.

If you live anywhere in Oregon, Washington state, western Idaho or Northern California, I would consider meeting you half way/ part way. Honestly, I do NOT look forward to packing and schlepping these things to Fed Ex, then worrying about them until receiving word of their safe arrival. Having said all that, Im in no particular hurry to sell. They look stunning, and its a pleasure to have them in my home. In fact, at their previous address, they hadnt been hooked up for decades and served strictly as Mid Century Modern décor pieces. A Google search will unearth quite a bit of information on Acoustron LWE speakers, (at least the more common LWE-1s) and their designer, Louis W. Here a bit of what I found.

These speakers will rock your world! Just takes a technician to hook them up which is why the idea never took off. A geophysical engineer in Houston named Louis W. Erath started a tiny speaker system manufacturing firm in Houston back in 1966. The first product was a bookshelf system (Model 1).

A side note: Previously I spoke with someone who had worked in Erath's shop and he said that one of the amps they had problems were some of the Sansui models. He said to get a circuit diagram for whatever amp I use (probably from a service manual as they are rarely included in users manuals) and send it to him and he would be happy to mark where I needed to clip inside the amp. He said that there was a good chance that the bulbs would still be good since it was a low power application and that bulbs degrade with hours of use, not time. He said that there is one problem that can happen and that is that some amps, not many... He also mentioned that his listening room is 18' x 15' which is ideal for listening to these speakers.

Ive only been waiting about 3 years to put this system together and I finally got all the pieces together tonight. Erath really knew what he was doing! I wouldn't trade my K-horn system for it but MAN do they put out some bass!!

I've only hooked up a cheap CD player directly into the amp using the gain controls but it sounds pretty amazing, especially when you consider the flat sound they give with other amps. Almost everything in my basement was rattling when I cranked it up, and they're on a concrete floor. Good tip for anyone experimenting with these speakers: Turn the "Room Gain" down on the back of the speakers - it makes a huge difference! Then I read the Operating Instructions paper (see link in above post) and cranked the Room Gain down to "2" and it tightened it right up.

And I still hear the extended bass response! (I'm in a small room about 16' x 20') This might be obvious to some, but I had to waste a bunch of time messing with the EQ on my preamp and source until I read that page with the recommended Room Gain settings for various room sizes. Listening to the latest Edie Brickell & the New Bohemians and the kick drum is moving my shirt. Acoustron went out of business (1973) after suffering financial losses in the language lab end of their business. Acoustron licensed 140 LWE dealers nationwide, many of them McIntosh dealers, as their amplifiers worked well with the LWE circuitry. Soon after Acoustron's demise, many LWE dealers closed out their remaining stock at a discount, some telling their customers that there was "a fire at the Acoustron plant" which was untrue - there was never a fire. Vintage LWE speakers are characterized by their near exclusive use of CTS (Chicago Telephone Supply) drivers with Electro-Voice T-35 tweeters (used in some models), 3/4" plywood cabinets with walnut or birch veneer, and 3/4" MDF baffles and backs. The demise of Acoustron combined with the difficulties in marketing and supporting a loudspeaker that needed a modified amplifier along with Louis' busy career in geophysical instrumentation pretty much ended the LWE loudspeaker. CM Labs briefly resurrected the LWE technology for their CM15 Servosound Feedback Speaker System in 1974, going so far as to modify their amplifiers (CM911) to include 6-pin cinch-jones connectors so their feedback speakers (or LWE speakers) could plug right in. The item "Acoustron LWE-II vintage speakers (Louis W. Erath) ULTRA RARE" is in sale since Thursday, June 4, 2020. This item is in the category "Consumer Electronics\Vintage Electronics\Vintage Audio & Video\Vintage Speakers". The seller is "marpentrac_0" and is located in Gresham, Oregon. This item can be shipped to United States.