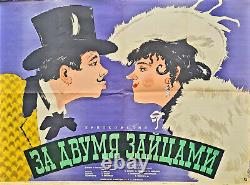 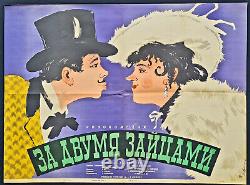 Original Russian film title (on the poster). IN: 30 x 40= CM: 76 x 102. Original vintage Soviet movie poster from the first released of the film in Soviet Union. For the cult USSR film. Is a Soviet Ukrainian feature comedy film directed by Viktor Ivanov, released at the Kyiv Dovzhenko Film Studio in 1961. The film was based on the play of the same name by Mikhail Staritsky, which in turn is a reworking of Ivan Nechuy-Levitsky's comedy "On Kozhemyaki". The film was filmed in Ukrainian at the Dovzhenko Film Studio, as it was originally awarded the second category and was planned to be shown only on the territory of the Ukrainian SSR. Later, when the film gained immense popularity, it was partially dubbed by the same actors into Russian, and was launched in the all-Union distribution. The original audio track in Ukrainian was considered lost for a long time, but was found in the Mariupol film fund in 2013. On October 27, 2013, the film with the original Ukrainian-language dubbing was presented to the general public in Kyiv. Svirid Petrovich Golokhvosty (Oleg Borisov) is the unlucky owner of his own barbershop, a fashionista and a heliporter. Having gone bankrupt, he decides to fix his affairs with a profitable marriage. By chance, he learns that for his ugly daughter Pronya Prokopovna (Margarita Krinitsyna), her father gives ten thousand dowries. Walking with his friend on Vladimirskaya Gorka, he sees a beautiful girl Galya (Natalia Naum) and falls in love with her. One evening, having met Galya, Golokhvosty begins to pester her. At this moment, Galya's mother, Seklet Limeriha (Nonna Koperzhinskaya), finds them and makes him swear to marry Galya against her daughter's wishes. The next day, Svirid Petrovich goes to visit the Serks and receives a blessing for marriage with Pronya Prokopovna. Returning from the bride, he accidentally runs into Sekleta and ends up on her name day. There, Sekleta informs her guests that Galya and Svirid are now a bride and groom.

Galya runs straight from the engagement to her beloved Stepan and asks him for protection, he reassures her. The wedding day comes, but Golokhvosty's plans are not destined to come true: Sekleta's girlfriends, who were present at the engagement of Svirid Petrovich with Galya, accidentally learn about his upcoming wedding with Pronya Prokopovna and inform Sekleta.

She runs to the church and announces to those present that Svirid Petrovich has become engaged to her daughter, and he will marry Pron only because of a rich dowry. Pronya Prokopovna and her parents drive away the treacherous groom, and the moneylender informs everyone that Golokhvosty is bankrupt, and by no means a rich groom. Left with nothing, Svirid Petrovich leaves with his idle friends. Worked in the field of socio-political poster; the author of the posters The enemy's scout will not escape... " (1939), "Long live the fraternal Union and the great friendship of the peoples of the USSR! 1939; together with the artist A. Rachevsky, October 45 - peace, work, freedom, equality, brotherhood and happiness of all peoples! Collaborated with the publishing houses "Art" and "Reklamfilm". Among his artworks are posters for such famous and cult ussr films as: "Sailor from the Comet" (1958), "Vesyolka" (1960), "Chasing Two Hares" (1961), "Frost" (1964), "Operation Y" (1965), "Three Fat Men" (1966), "Wedding in Malinovka" (1967), "Three Poplars on Plyushchikha" (1968) and others. Artworks by Shulgin's posters are kept in the State Museum of Political History of Russia (GMPIR), the Russian State Library (RSL), the State Museum of the History of Russian Literature named after V. Dahl (State Literary Museum), the State Central Museum of Cinema (GTsMK), private meetings in Russia and abroad. This item is in the category "Art\Art Posters".posters" and is located in this country: US. This item can be shipped worldwide.