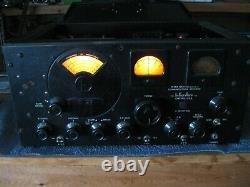 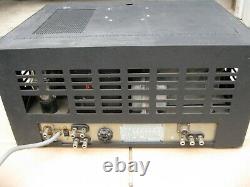 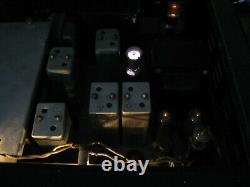 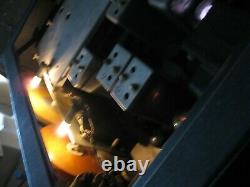 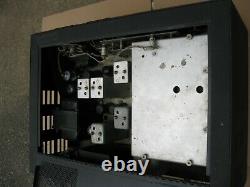 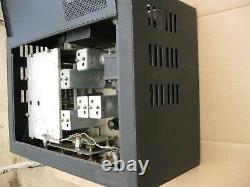 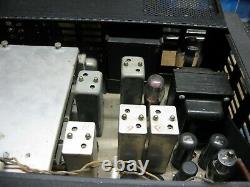 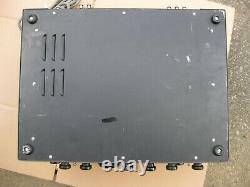 RARE Vintage Hallicrafters S-27 Ultra High Frequency Receiver. Condition is For parts or not working due to age. Unit powers up as shown but I have no further way to test it. The meter light on the right side is out and the plastic over the meter face is bubbled like it was exposed to high heat. Some scratches and scuffs on cabinet. Read more about it below. The Ultra High Frequency Receiver Hallicrafters S-27 is a very early all wave receiver covering the VHF range up to frequencies in the 2 m band, this frequency range was in those days adressed as "ultra high frequency", nowadays we are speaking of "very high frequency" (VHF). The set was usually used for band monitoring purposes, even when it was developed in the forties, this was still many years ahead of the use of the VHF range for broadcasting purposes. VHF broadcasting started in the USA in the 6 m band on frequencies around 50 MHz and was later reallocated to the 3 m band up to 100 MHz. Also the aircraft communications were moved to the VHF range from 118 - 137 MHz not before the end of World War II.
Single conversion superhet, IF 5250 kHz. Analog dial, band spread dial. The S - 27 is a hollow state receiver covering the VHF range.
The set developed around 1940 covers the 27 - 145 MHz frequency range, the later S - 27B version covers the 36 - 165 MHz frequency range. The standard S-27 UHF receiver is powered by 115 Volts AC, the common mains voltage found in the USA. So do not simply fix a plug on your newly acquired S-27 and connect it to the European 230 V mains, but make sure the voltage, your receiver is set to, before powering up. If there are any doubts, use a variable isolation transformer and increase the voltage slowly up to 110 V and check, whether your radio is already running properly, so it will be wired for 110 V operation. On the left side of the front panel, you find the rotating backlit main frequency dial, in contrast to the metal disc dials on older Hallicrafters models, only a part of the dial is visible behind the dial window. In the left lower corner of the frequency dial, you find the three position bandswitch. This lets you select one of three frequency ranges (27,8 - 47 / 46 - 82 / 82 - 143 MHz). Just below, you find the R. Gain control, the antenna trimmer, a bandwidth control (SHARP - BROAD) which also acts as mains switch and the A. Gain / volume control at the right. At the right, below the signal strength meter, you find the tone control and at the right the Send / Receive switch (to mute the receiver when used in connection to a transmitter) and the headphones jack. A high impedance speaker (5000 Ohms) can be connected at connectors at the rear of the receiver, to drive an 8 Ohms speaker, you need a matching transformer. Use the selectivity control to turn the radio on (yes - that's typical Hallicrafters, not to combine the mains switch with the volume control), turn the R.
Gain to the maximum setting clockwise and the A. Gain somewhere in a middle position and select the frequency band. The AVC should be activated (switch to the left) and the BFO should be turned off, make sure, the SEND/RECEIVE switch is in the RECeive position. Airport weather reports around 127 MHz. In the FM mode, look for some FM broadcast stations in the standard FM broadcast band from 88 - 108 MHz, BFO, AVC and ANL is inactive in this mode, the selectivity has to be set to BROAD for broadcasting stations, and the TONE control can be set to HIGH FIDelity or even BASS BOOST.
The reception uses a deemphasis constant of 100 usec. The meter is switched to act as a tuning indicator with optimal tuning when the indicator is in the middle position. In some cases, the antenna has to be tuned to maximum signal strength.

Signal path: The signal coming from the antenna is amplified in a RF amplifier stage using a acorn miniature tube (V1, acorn tube 956) and is fed to the mixer stage (V2, acorn tube 954), where the oscillator signal (V3, acorn tube 955) is used to generate a 5,15 MHz intermediate frequency. For FM operation, the signal has to pass a limiter stage (V9, 6AC7/1852) and is fed to the discriminator stage (V10, 6H6) for demodulation. An 6C8 is used in as AF preamplifier and two 6V6 in a push pull arrangement in the AF output stage. For the BFO, a 6J5 valve is used. In the power supply, a 5Z3 valve is used as full wave rectifier and a VR-150/0D3 voltage regulator.
The item "RARE Vintage Hallicrafters S-27 Ultra High Frequency Receiver 27 to 145 MHz" is in sale since Friday, April 17, 2020. This item is in the category "Consumer Electronics\Radio Communication\Ham, Amateur Radio\Ham Radio Receivers". The seller is "ronholl0" and is located in Akron, Ohio. This item can't be shipped, the buyer must pick up the item.