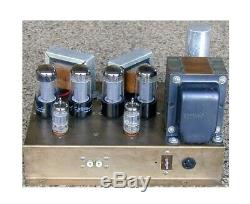 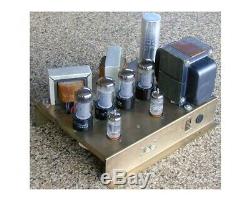 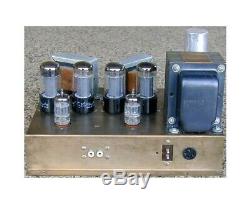 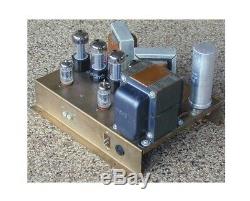 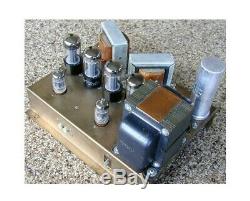 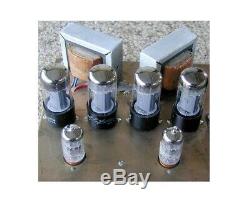 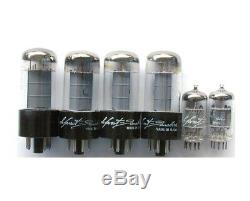 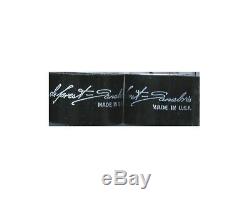 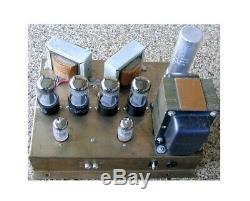 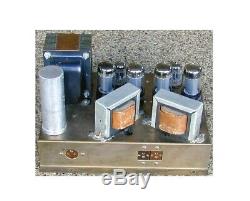 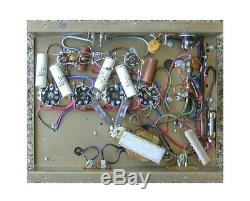 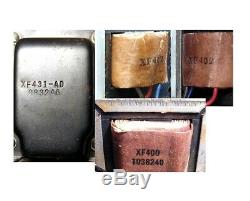 A DESCRIPTION OF THIS AMPLIFIER IS PROVIDED AFTER THE PHOTOS. PLEASE SCROLL DOWN TO SEE THE DESCRIPTION. Ive never seen another one like it anywhere (including on the Internet). It may, in fact, be one-of-a-kind and is historically significant as will be discussed further below. Please read the following Description carefully as it contains useful and very interesting historical information regarding this amplifier.

Have been added to this amplifier or not including the power transformer and the other parts/components/transformers, etc. Some of the parts beneath the chassis look newer than other parts in my view but I dont really know if this is correct or not and if anything has been added, updated, modified, etc. In connection with this amplifier.

I did notice that at least one of the wires from the transformer are covered with electrical tape and not connected to anything. Likewise, there is a fuse mounted in a fuse-holder beneath the chassis. I did not test this fuse or remove this fuse and I dont know if it is good, original, the correct one for this amplifier, if it is wired correctly, etc. Accordingly, I know nothing about this amplifiers history of repairs, modifications, additions, substitutions, etc.

(if any) and I will leave an overview of all of these items including the fuse, transformers, etc. Please check out the detailed view of the underside of the amplifier chassis which I have provided.
In summary and in my opinion based on my research as discussed above, this amplifier is extremely rare and may, in fact, but one-of-a-kind or a sole survivor. Likewise, it appears to be of important historical significance and evidently was the result of a joint effort by two very famous pioneer inventors in the electronics field, namely, Lee Deforest and Ulises Sanabria. I believe that it would make a wonderful addition to any vintage amplifier collection and a really special item to own! I have not done anything to this amplifier and all of its parts, transformers, wires, electronic components, tubes, sockets, capacitors, resistors, jacks, prong assembly, fuse, and all of its other components and I know nothing about their condition. The above-described amplifier may have been worked on, repaired, had parts replaced/repaired, had parts added, and/or been modified by someone else in the past, but I dont know whether this is true or not. In this regard, I have done nothing to this amplifier and I have not inspected it internally or externally. However, I do not know how much work, parts, wires, wiring work/replacement, repairs, rewiring, upgrading, power transformer(s), output transformer(s), electronic components, power cord/plug, additional parts, tubes, jacks, sockets, resistors, capacitors, fuse(s), etc. Likewise, I dont know if any or all of the historical information listed above involving the DEFOREST-SANABRIA CORPORATION is correct or not and, in this regard, I cannot guarantee that it is accurate and complete. This amplifier is very heavy. While I will pack this item very securely, some of the wires, components, parts, capacitors, resistors, sockets, transformers, jacks, prongs used by the prong assembly, resistors, capacitors, fuse, etc. However, I will do my best to try and prevent these situations by very carefully packing this amplifier although I cannot guarantee that they wont happen. Please make a note of this. Furthermore, all of the tubes, tube sockets, capacitors, resistors, jacks, transformers, sockets, prong assembly, fuse, and all of the amplifiers other components/parts need to be checked out by an electronic expert to see if the tubes are good, if the tubes are the correct ones, if the tubes are in the correct sockets, if the fuse is good, if the fuse is the correct one for this amplifier, and if all of the tubes, tube sockets, capacitors, resistors, jacks, transformers, sockets, prong assembly, fuse, and all of the amplifiers other components/parts are good and operational before the amplifier is powered-up, tested, used, worked on, modified, connected to any other equipment, connected to a power source/supply, supplied with a power cord/plug, upgraded, operated connected to any speakers, etc. Likewise, I have no idea whether everything is original or not in the above-listed equipment and I therefore cannot make any warranties regarding originality.

In this regard, I do not know if any of the parts, power transformer, output transformers, capacitors, resistors, jacks, sockets, prong assembly, fuse, and all of the other components used in the amplifier are original or if they have been replaced and/or added at some time in the past. I also do not warrant that this amplifier is complete and I do not know if there are any missing or incorrect parts/components, etc. The item "ULTRA RARE VINTAGE DEFOREST-SANABRIA STEREO TUBE AMP AMPLIFIER UNIQUE -LOOK" is in sale since Tuesday, January 21, 2020. This item is in the category "Consumer Electronics\Vintage Electronics\Vintage Audio & Video\Vintage Amplifiers & Tube Amps".

The seller is "jaymalkin" and is located in Wheat Ridge, Colorado. This item can be shipped to United States.