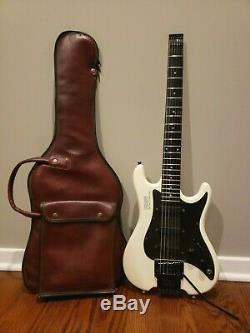 Here's one Hohner headless electric guitar that hardly ever comes up anywhere on the net: a 1986 (first year production) Hohner S-70 (all single coils [not the H-70 which has at least one humbucker]). Three things make this vintage, rare guitar very special: 1 It's white. Only seen black or sunburst out there. 2 It has an Ebony fretboard. Only seen Rosewood out there.
3 It has three single coils (presumably original EMG Select pickups). Haven't looked under the hood, but they're powerful even if they are passive. Always seen either an H-S-S or H-H configuration. It is a full-scale guitar which features a Steinberger Licensed R-Trem (same exact tremolo as the original R-Series Steinberger); However, the body is slightly smaller measures 12" across the lower bout, 10" or so at the upper bout, and 30 in length. , and it is perfect for travel... Especially on airplanes in the overhead-storage compartment. The guitar is also light at 6 pounds, 11 ounces which makes it easier to carry around. The deluxe-looking, vinyl gig bag appears to be original to the guitar due to its snug fit and shape. All the zippers and buttons work as they should, but one strap-handle is missing (had been torn off, apparently). Most other gig bags seen with other similar models are usually the gray or black, aftermarket cloth-type that are a little oversized anyway... So I'm pretty sure that this bag is original. The original tremolo arm is also included... Although slightly wobbly when attached to the trem, but no damage appears anywhere in the trem-arm cavity or on the arm itself. It just might need a new plastic sleeve piece or something where the "ball"-end of the tremolo arm meets. The arm doesn't fall out or anything so it's good. A cool feature about this trem system is that there is a locking position to fix the bridge or to have it floating at one's desire. I don't do much whammy stuff on it so I usually have it locked. A retro-looking (perhaps original 1980s) adjustable shoulder strap is included as well. It matches the look of the entire package. The item "ULTRA RARE VINTAGE Hohner S-70 White Headless Travel Guitar Steinberger Tremolo" is in sale since Sunday, December 8, 2019. This item is in the category "Musical Instruments & Gear\Guitars & Basses\Electric Guitars". The seller is "h0738" and is located in Bridgewater, New Jersey. This item can be shipped to United States.